The Paraiba Star of the Ocean Jewels Necklace

You are here: Home / The Paraiba Star of the Ocean Jewels Necklace

The Paraiba Star of the Ocean Jewels Necklace 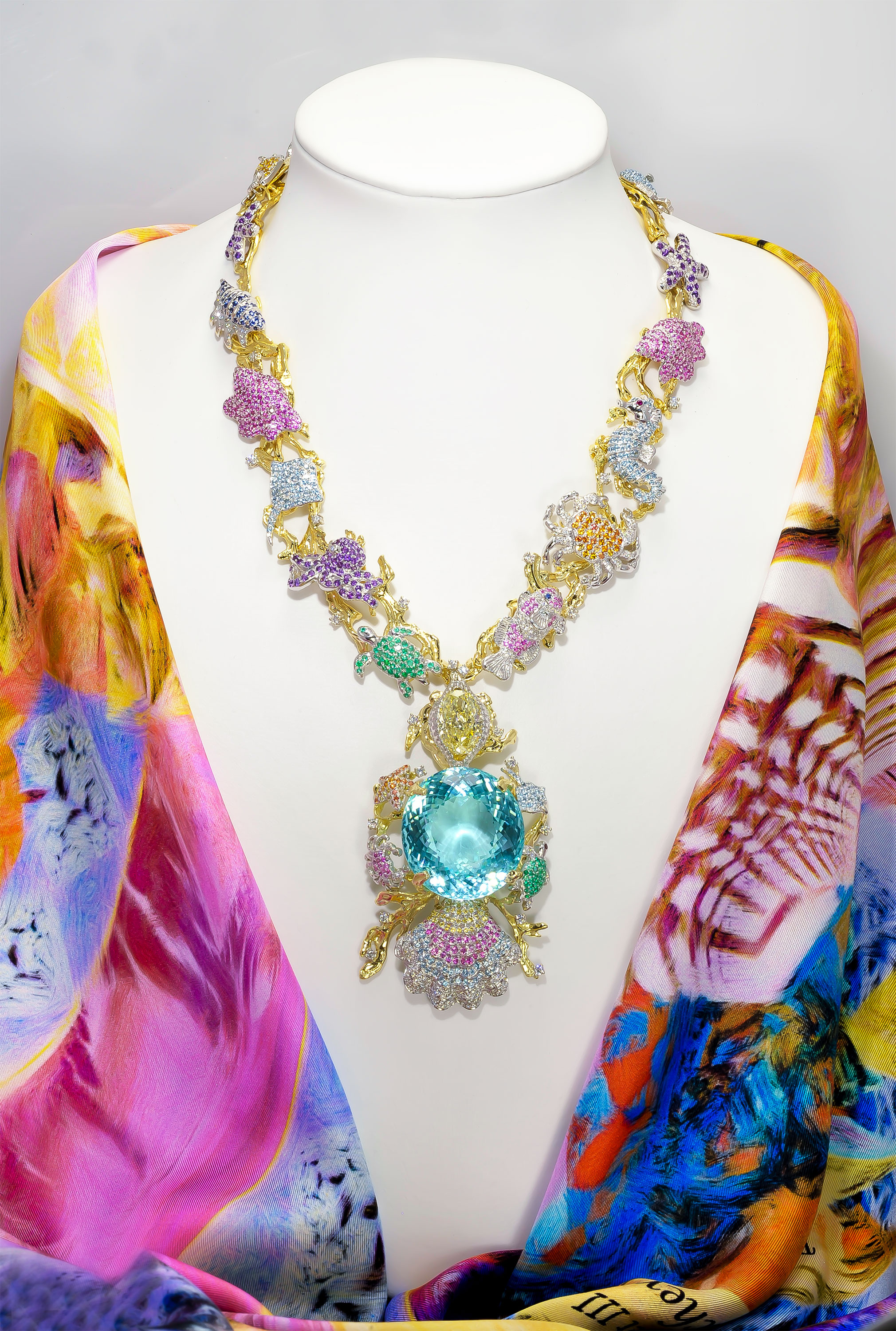 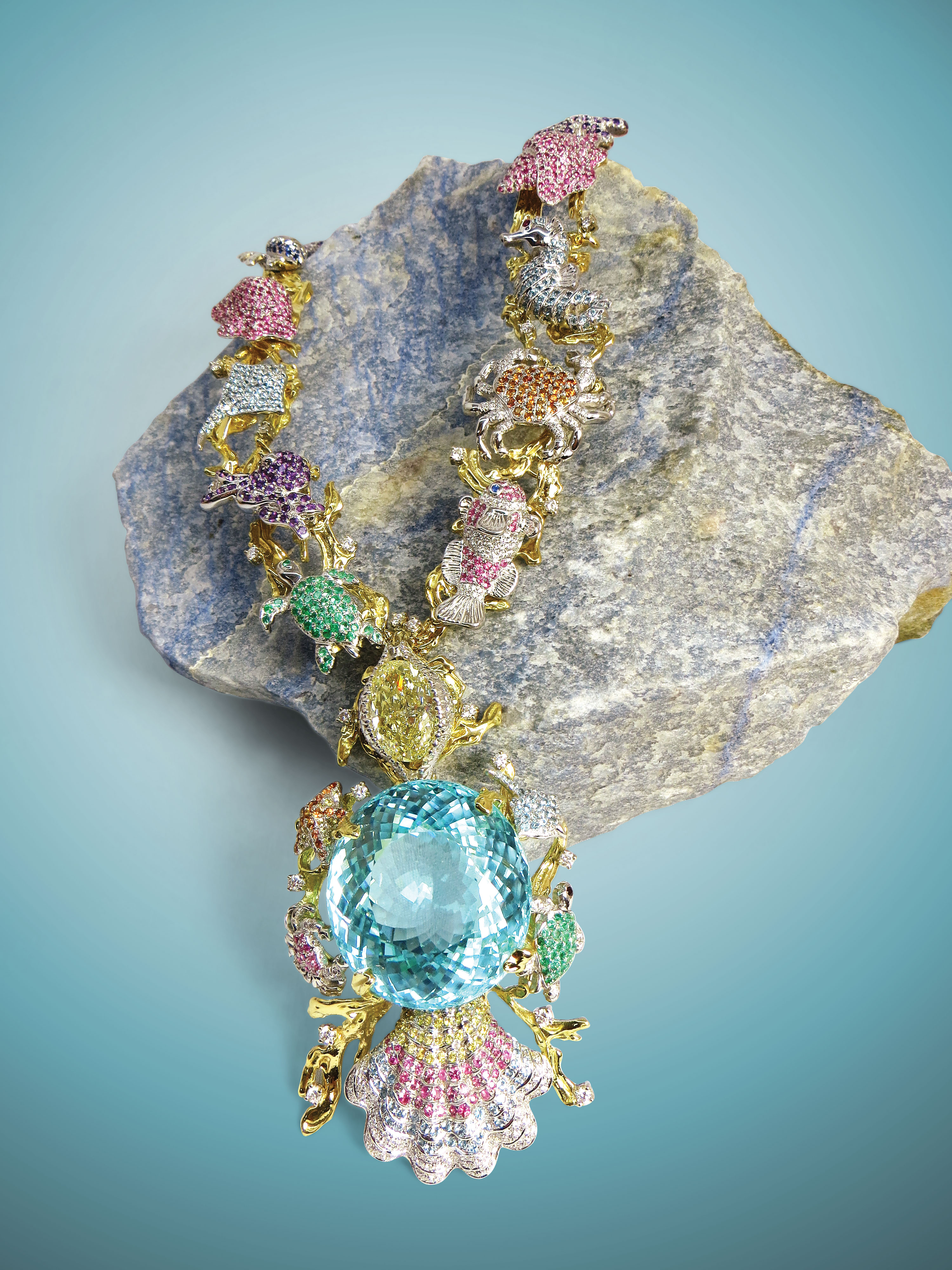 The flawless 191.87 carats Paraiba tourmaline, The Guinness World Records largest, has been placed by experts in the field amongst the world’s rarest gems, including: the Logan Sapphire, the Hope Diamond, the Alan Caplan Ruby and the Golden Jubilee.

I am extremely proud to introduce to the market a one-of-a-kind creation that I designed, named, “The Paraiba Star of the Ocean Jewels” Necklace. It features as its center stone the world’s largest Paraiba Tourmaline – a natural treasure of historical importance.

This majestic 191.87 cts. gemstone is certified by Guinness World Records as the largest cut Paraiba tourmaline on the planet. It has been placed by experts in the field amongst the rarest gemstones in the world, such as the Logan Sapphire, the Hope Diamond, the Golden Jubilee, the Alan Caplan Ruby, and the Cullinan Diamond.

Mr. Vincent Boucher, Canadian financier, physicist, artist and President of Billionaire Business Enterprises Inc., first introduced this stone to the market in 2009. His passion for world-class gems, and his desire to collaborate with a reputable and renowned design house, brought Mr. Boucher to Kaufmann de Suisse to create a handmade objet d’ art in which to present this significant gemstone.

The characteristics of the tourmaline category include a wide range of colors, and the word “rainbow” is often used to describe this group. Tourmaline crystals showing only one fancy color however, are quite rare, regardless of size. For Paraiba tourmalines, the traces of copper, gold and manganese are what differentiate it from other tourmalines and give it an incandescent neon-like color and inner glow.

Discovered in 1987 at the Batalha mine in the Brazilian state of Paraiba, this particular type of tourmaline is found only in a handful of places on earth, and often the crystals are broken, etched or heavily included and a flawless stone with a weight of 3 cts. is extraordinary. To illustrate the rarity of this gem – for every 10,000 carats of diamonds mined, there was only 1 ct. of Paraiba tourmaline mined, and don’t forget, mines have been empty since 2008. Additionally, only 50 kilograms have been mined in the entire world.

When originally introduced to the market in 1990 at the Tucson show in Arizona, the price was approximately $250 per carat at the start of the show and in only 6 short days, demand was so great that their price shot up to $2500 per carat.

In Rappaport’s October 2013 Rappaport Magazine, the authority on gemstone pricing, the price for Paraiba tourmalines larger than 10 cts has already escalated to beyond $100,000 per carat, and they state that a ceiling price has not been established on the material because prices for these tourmalines continue to climb.

It is important to note that most gems are treated with heat or irradiation in a laboratory to improve the color or clarity of the stone however these processes effectively negate a stone’s inherent energies, or energy waves. In this divine Paraiba tourmaline, there have been no treatments made to the stone and it remains pure and untouched.

It was a rare opportunity to design this piece to showcase a world-class gem, and my personal inspiration was the result of living in Palm Beach, Florida for the past few winters and becoming grateful and enamored with the beauty, strength and majesty of the sea. So much life is created beneath the surface, just as in the formation of this incredible Paraiba tourmaline. The brilliant blue-green color of the stone is symbolic of our little blue planet, 70% covered by oceans, whose health is inextricably linked with our own.

The oceans are the wellspring of life and connect us all – from microbe to mammal to man. The elaborate composition is a celebration of the unfathomable grand design and interdependent nature of our planet, an appeal to respect, protect and to care for each other. Each individual creature I chose was sculpted by hand to lie upon the delicate coral branches from which it finds shelter and sustenance. The myriad of colors and the diversity of stones all mimic the diversity in nature.

Multicolor precious and semi-precious stones are embedded into each sea creature, and include: pink, blue, yellow and orange sapphires, emerald, ruby, blue topaz, amethyst, tsavorite, rubellite garnet and diamonds. The total number of stones is 1,706 including one brilliant yellow canary 10.73 cts. diamond, and of course the dazzling and delicious Paraiba tourmaline. The exquisite yellow diamond is poised beneath the necklace as though a brilliant moon in orbit around the transparent blue planet beneath. And then, the raison d’être, the core, 191.87 cts Paraiba tourmaline, hangs delicately in balance – the perfect marriage of form and substance, art and science. This piece will go to auction in 2014, and the return on investment for this stone is of great merit and consideration. The near exhaustion of this gemstone, along with the incomparable size, natural, untreated color and transparency of this gem make it a rare geological anomaly, possession of which will have historic significance. 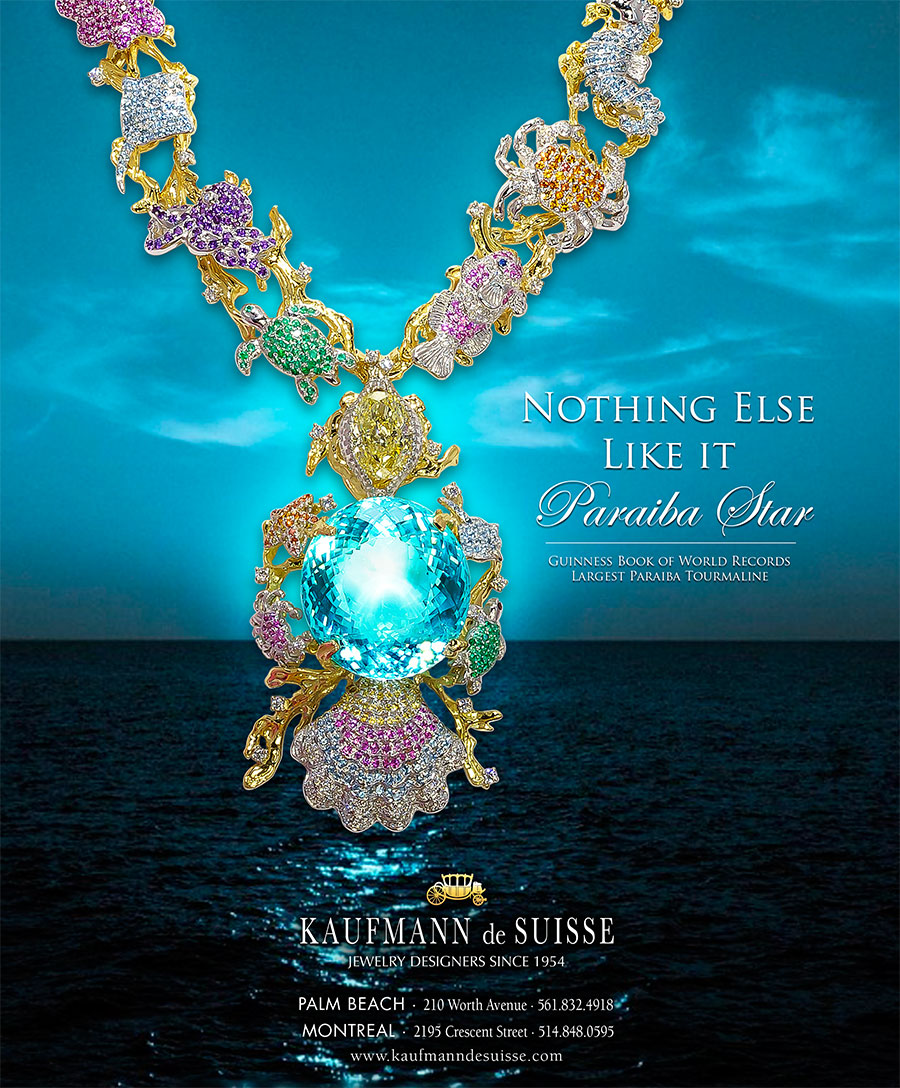